The Limited Edition Bonneville T214 celebrates the achievements of Texas-born racer Johnny Allen, and his record-breaking Triumph-powered Cee-Gar streamliner which, in 1956, set the first of many land speed records at the Bonneville Salt Flats by recording a two-way average of 214.4mph.

On 6th September 1956 , AMA and FIM observers looked on as Allen set the world absolute speed record for a motorcycle at 214.40 mph. The now-classic 1959 Triumph Bonneville was named in tribute to the Texas Cee-Gar team’s record-setting efforts.

The 214.4 mph record lasted until 1962, when it was broken by Bill Johnson, riding the nitro methane powered Dudek Triumph streamliner to a speed record of 224.57.

The new Bonneville T214 Limited Edition, based on the T100 Black, pays homage to the remarkable land speed record achievement. The hand painted Caspian Blue and Pure White colour scheme complete with red and white chequer detailing echoes that of the 1956 Texas Cee-Gar. The blue front mudguard shares the same white star motif from the nosecone of the iconic streamliner. The shortened rear mudguard combined with blacked out wheel rims, handlebars, and rear suspension springs add to the authentic look which is complimented with red seat stitching detail and a smaller front headlight.

Limited to a total of 1000 bikes worldwide, each is individually numbered, and comes with an unlimited mileage, two year factory warranty. Service intervals are every 6000 miles, or one year, whichever is soonest.

New for Autumn Winter 14 is a range of land speed record clothing and merchandise that echo the spirit of the T214 and Cee-gar. The Speed Record jacket takes all of its styling from that ground breaking machine from the colour to the subtle sign off of the chequered design with the white contrast piping. This heritage styled riding jacket is still full of riding technology like CE certified Knox® protection, TriTex waterproof and windproof Z liner with an additional quilted liner that can be removed too help create the perfect micro climate. Other casual items in the range include t-shirts, polo shirts, zip thrus, and caps.

The story of the Texas Cee-Gar

The Texas Cee-Gar currently resides in the National Motorcycle Museum, near Birmingham, England. It has been lovingly restored by Big D Motorcycles following a devastating fire at the museum in September 2003.

The original power unit was built by Jack Wilson with the aerodynamic glass fibre bodywork designed by the pilot J.H. “Stormy” Mangham. The fire damaged Cee-Gar was restored by a team in Texas led by Keith Martin of Big D Motorcycles who had worked for Jack Wilson. Now in pristine condition, the Cee-Gar complete with its 650cc Thunderbird engine looks just as it did on that famous day, 6th September 1956.

The Pursuit of Speed – The Triumph Castrol Streamliner

In the continued pursuit of speed, Triumph and Castrol have joined forces to create the world’s most advanced streamliner – the Triumph Castrol Rocket. With an ambition of hitting 400mph, Castrol Rocket showcases the passion and endeavor for man’s quest to be the fastest.

The Bonneville Salt Flats are a challenge in themselves. 100+ degrees heat combined with 1286m altitude and a surface that is similar to sand or packed dirt all take their toll on performance.

Former NHRA Pro Stock Motorcycle Champion and engine tuner Bob Carpenter, has de-stroked two Rocket III engines from their stock 2,294cc to just 1,485cc each (so 2,970cc in total) to meet the 3,000cc total displacement class rule requirement. He has then added his signature cylinder head porting to the stock castings and a Garrett GT2876R ball bearing liquid cooled turbocharger to each engine. Each methanol-burning engine produces 500bhp at 9,000rpm and 250ft.lbs of torque.

Matt Markstaller, a long-time land-speed enthusiast with more than 25 years of experience on the Bonneville Salt Flats is responsible for the aerodynamics and the Carbon Kevlar monocoque. Used in fighter jets and racing cars, the monocoque design incorporates the body and chassis into a single stressed unit. And, built with Carbon Kevlar, the result is much stronger and lighter than conventional materials and construction.

Over the coming months, the Triumph Castrol Streamliner will continue its engineering, testing, and development in the pursuit the ultimate accolade of being the world’s fastest motorcycle.

First established in 1902, Triumph Motorcycles celebrated 110 years of motorcycle manufacture in 2012. For more than two decades, Triumph Motorcycles has been based in Hinckley, Leicestershire, and has produced iconic bikes which perfectly blend authentic design, character, charisma and performance. Building around 53,000 bikes per year, Triumph is the largest British motorcycle manufacturer and has over 750 dealers across the world.

At the heart of Triumph’s philosophy is a commitment to developing truly unique motorcycles that offer a blend of distinctive design, intuitive handling and performance to enjoy the perfect ride. . The innovation and engineering passion that gave birth to the iconic Bonneville of the 60s has today created a broad range of bikes suited to all motorcycle riders, including the striking 2.3 litre Rocket III, the unmistakable Speed Triple and the TT and Daytona 200 winning SuperSports Daytona 675R.

Triumph currently employs around 2000 personnel worldwide and has subsidiary operations in the UK, America, France, Germany, Spain, Italy, Japan, Sweden, Benelux , Brazil, India and Indonesia as well as a network of independent distributors. Triumph has manufacturing facilities in Hinckley, Leicestershire, and Thailand plus CKD facilities in Brazil and India. 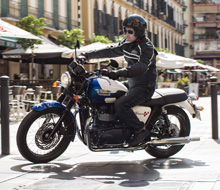